Education and training
1989 Diploma as Art Teacher at the Art Institute “Nordio” in Trieste, architecture and design section.
1993 First training at the Disney Accademy in Milan, course in drawing certificated by Giovan Battista Carpi, famous italian artist (laurea at honorem in comic art) and the famous american artist Carl Barks.
1995 I’ve been invitated in Paris to partecipate in a full immersion course of animation, organized by Walt Disney Co.

1994 I began the cooperation with Walt Disney Co. Italia, starting to draw merchandising / advertising projects, followed from 1995 by drawing for the following publications:

From 1997 to 2005 I consider the “PK, The new adventures” one of my best cooperation for Walt Disney Co. since I have drawed almost 1/5 of the total stories published. This experience gave me the opportunity to use my favorite style of drawings, superheroe carachters but in a disney context.
2003 I received an award as italian best disney’s artist in 2002/2003.
2006 I am still cooperating with Disney Co. Italia, drawings for new projects.

1999 and 2004: Cooperation as teacher in comics, in Trieste (organized from the European Community), durations: 90 hours each course.

Other professional cooperations
1999 Graphic Illustrations for the Max Magazine
1999 Comic strips advertising for the launch of the car Fiat Multipla.

Influences
John Buscema, Jack Kirby, Moebius, Miyazaki, Otomo, Sergio Toppi, Mike Mignola, Alex Raymond, Floyd Gottfredson - Carl Barks and Romano Scarpa for Disney
Exhibitions
1994 Partecipation at the Comics Festival in Rome and Florence for the “50th Anniversary of Mickey Mouse (the comics book) in Italy”
1999/2000/2003: I’ve been invitated in Germany to partecipate with my artwork at the Comic exhibitions in Essen, Nuernberg and Muenchen.
Posted by Pastrovicchio at 5:05 PM 2 comments:

Hoping to realize superheros in the next future....

Posted by Pastrovicchio at 2:34 PM 2 comments: 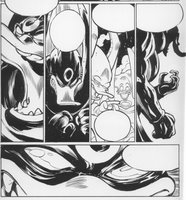 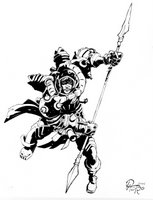 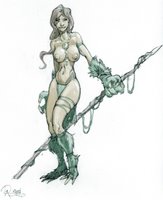 Posted by Pastrovicchio at 3:53 PM 2 comments:


Posted by Pastrovicchio at 9:47 AM No comments: